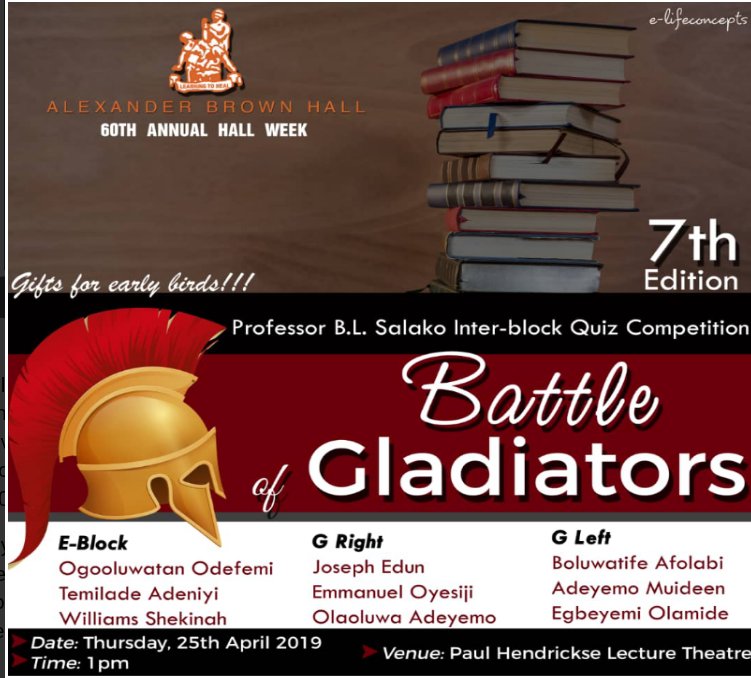 As part of the activities lined up for the 60th annual health week of Alexander Brown Hall, the 7th edition of Professor B.L Salako quiz competition held yesterday at Paul Hendickse Lecture Theatre. The annual quiz competition in honour of the former provost of the College of Medicine, University of Ibadan takes among all the seven blocks in the hall. Though scheduled for 1pm , the competition did not start until 2:30pm with a dismal turn out of Brownies.
Only three blocks which included G right represented by Joseph Edun, Olaoluwa Adeyemo and Emmanuel Oyesiji, G left by Boluwatife Afolabi, Muideen Adeyemo and Egbeyemi Oladele and E block by Ogooluwatan Odefemi, Temilade Adeniyi, William Shekinah participated in the competition. There were no contestants from any of the female blocks from A to D.
The quiz which was moderated by Dr Subomi was divided into two separate parts. The first part had four rounds comprising Diamonds ( Knowledge of ABH, UI and UCH ) Clubs (General Science, Biological Science, Medicine and Computer Science) Spades (General Knowledge, Sports, Law, Economics Hearts Arts, Literature, Culture, Use of English, Music). The second part was the speed drill where the contestants were expected to answer as many questions as possible within one minute.
At the end of the keenly contested competition, G right came first with a total of 32 points, E block first runner up with 30 1/2 points and G left second runner up with 12 points. Cash prizes of N10000, N15000 and N20000 were awarded to the third, second and first respectively. However, no medals were awarded to the contestants.