THIS WEEK IN HISTORY: FUNMILAYO RANSOME-KUTI

Funmilayo Ransome-Kuti (1900-1978), a name that virtually all Nigerians would have heard before, was the first Nigerian woman to drive a car.  Chief Funmilayo Ransome-Kuti was so much more: a teacher, a traditional aristocrat, a women’s rights activist, a political campaigner, a suffragist, and the founder of the Abeokuta Women’s Union (AWU) which later became the Nigerian Women’s Union (NWU).

Funmilayo Ransome-Kuti was born in Abeokuta, Ogun State to a father who farmed and sold palm produce and a mother who was a seamstress. She was born in a time when girls were relegated to the kitchen and boys went to school. However, Funmilayo Ransome-Kuti’s parents believed that both male and female children deserved to be educated. She was part of the first set of female students to attend the Abeokuta Grammar School, where she taught briefly after she graduated, before proceeding to Wincham Hall School for Girls, Cheshire, England to further her studies. Many do not know that Funmilayo Ransome-Kuti used to be Frances Abigail Olufunmilayo Thomas. While in England, she dropped the name “Frances Abigail” and shortened her name to Funmilayo, which is the name most people came to know her by. Some say that the sudden name change was in reaction to the racism she experienced during her stay in Britain. When she finished schooling, she returned to Abeokuta where she worked as a teacher at Abeokuta Girls’ Grammar School.

Funmilayo got married to Reverend Israel Oludotun Ransome-Kuti in 1925 and left the teaching job after marriage. The couple had four children: a  daughter, Dolupo, and three sons – Olikoye, Olufela (Fela), and Bekolari (Beko). In the 1920s, she founded a club for women of elite families, teaching them that they could do more as women and also organized literacy classes for the women that were not literate. Not too long after, she established one of the first nursery schools in Nigeria. Just like her parents, Funmilayo Ransome-Kuti valued formal education. 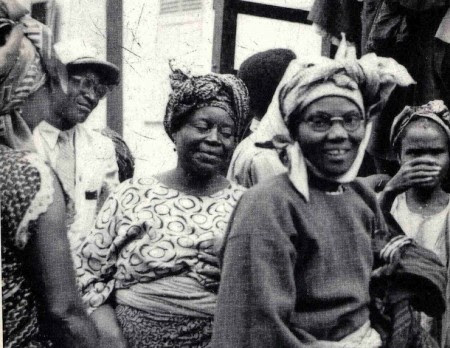 When you think Funmilayo Ransome-Kuti, you think Feminism. She was a leading advocate of women’s rights in a time when women had been conditioned to be quiet. She founded the Abeokuta Ladies Club (ALC) in 1932. ALC  started as a charitable group of middle-class, western-educated Christian women. The club gradually became more political and feminist in its orientation over time and in the 1940s, began to formally admit the Abeokuta market women, who were mostly impoverished and illiterate, thus predisposing them to exploitation by the colonial authorities. Funmilayo Ransome-Kuti organized literacy classes for the members and worked hard on reducing the many social and political inequalities that several Nigerian women faced each day. One of her many efforts in protecting her members involved a successful campaign to end the seizure of rice from market women without due compensation.

The ALC expanded and became the Abeokuta Women’s Union (AWU), open to all Abeokuta women and then progressed even further to become the Nigerian Women’s Union (NWU), a national organization that eventually gained recognition as the Federation of Nigerian Women’s Society (FNWS) with the mandate of articulating women’s position in the Nigerian society. Under Funmilayo Ransome-Kuti’s leadership, the women worked together to protect their rights, protest against unfairness or exploitation and improve their position in society through better access to education, health care, and suffrage amongst others.

Funmilayo Ransome-Kuti fought for women’s inclusion and the need for equal opportunities for women. She talked about this every chance she got and soon earned herself the title, “The Lioness of Lisabi”, who is a traditional heroic figure of the Egba people. She was an advocate for the people.

Funmilayo Ransome-Kuti received the national honor of membership in the Order of the Niger. The University of Ibadan also bestowed on her, an honorary doctorate of laws in 1968 and she was awarded the Lenin Peace Prize in 1970.

Funmilayo Ransome-Kuti died in April,1978 following complications from injuries she sustained in February 1978, after being thrown out a second-floor window by Nigerian soldiers who raided the home of her son, Fela Anikulapo-Kuti, a popular Afrobeat musician and an activist as well.

Funmilayo Ransome-Kuti was known and is still known as a progressive revolutionary, a pioneer Nigerian feminist, a suffragist, and an activist in every sense of the word. Today, we remember and celebrate her brave contributions to gender equality and the protection of human rights.

A SECOND ATTEMPT AT LIBERATION