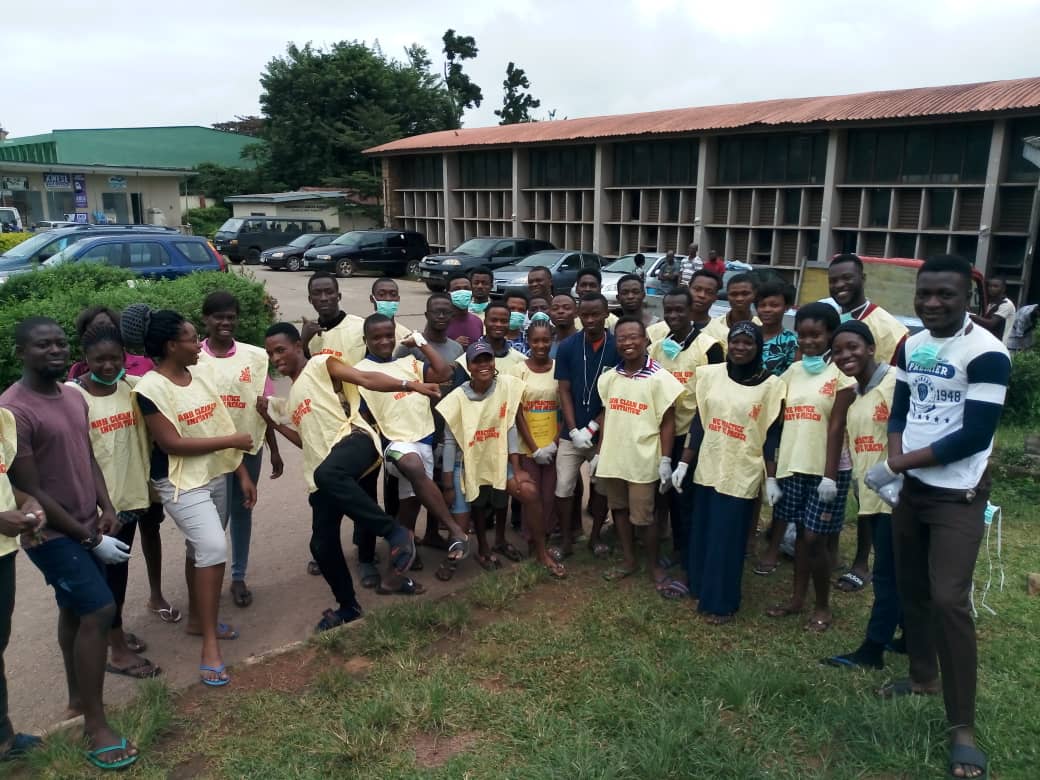 ABH, UCH – Residents of Alexander Brown Hall, under the guidance of the Health Ministry came out today to participate in the “ABH Environmental Clean-UP”. In line with the World Clean-UP Day, scheduled for today, September 15, Brownites marched out of their rooms to join the members of the Health Ministry and the Executive Council to clean up the various blocks and its environs.

Targeted towards removal of junks and forgotten items, various Brownites gathered themselves in groups as they scoured through the various blocks to eradicate these items. Worn out shoes, plastics, broken cupboards and wardrobes, chairs, tables and other discarded personal belongings were the selected items of interest for the exercise today.

Lasting over three hours, over six tonnes of junk were retrieved from the various blocks and gathered at the central dumpsite for disposal. Several shocking discoveries were made including bags of sachet water and plastics stored behind D-block, close to the sewers which are being sold to Brownites for consumption and to the locals for the manufacture of local drinks (Zobo) respectively.

Speaking with the Health Minister, Chibuike Nwachukwu, he lamented at the recalcitrance of the retailers who have refused to heed series of warning as to the improper storage of their wares. “I have told the woman to remove the bags of water. It is actually not hygienic, but she keeps giving excuses. The Executive Council will see to a lasting solution to this.”

The exercise was welcomed by all in attendance, expressing their joy and commending the exercise not only for its hygienic values but also providing a medium for Brownites to come and work together.

“I am happy to have partook of this. Asides cleaning the environment, it gives room for us to come together and work. I do not even reside in ABH, but my friends do; and coming here and seeing them under this project really made me happy. Welldone to the ABH Excos,” said Benjamin Eromosele, a 600 level medical student.

Alao Uthman, another participant commended the exercise, expressing the need for environmental clean-up once in a while in order to keep the hall clean. Members of the 2015 and 2016 Medical Classes in their numbers, commended the exercise and lent their voices against the poor sanitation practices of some of the local vendors, especially the storage of sachet water close to the sewers in D-block.

The Health Minister, speaking with ABH Press after the exercise expressed his joy at the turnout of Brownites for the exercise despite the challenges with power supply and water at the onset. He went further to comment that the exercise was to serve a bigger purpose of uniting members of the hall, and stimulate them to come for activities that concerns the hall. He advised Brownites on the need to be proactive in ensuring the hall is kept clean at all times. “I saw a lot of unnecessary things on many blocks today. Things that should be been discarded properly a long time ago, but were left carelessly to fester the envrioment. We need to make conscious effort when it comes to discarding old items and belongings and ensure that they are done properly”.

“I do not think this should be done regularly, else it may lose its purpose of uniting Brownites. If we make it a regular thing, Brownites will get bored and may not come out to participate. So for now, we will do it as the need arise,” he concluded.

Chinedu Nwaduru is a senior writer for ABH Press and former Editor-In-Chief of ABH Press.

DEAR G-BLOCK, WHY ART THOU FORSAKEN?

“…Another Page in the COMUI’s Drama Book”